The residents of many apartments, manufactured homes and other housing communities do not receive a bill from their local utility.

Instead, their utility service might be submetered, included in the rent, or pro-rated among others in the community. A submeter allows an apartment owner or other company to purchase utility service (electric and water) and then resell that service to tenants by utilizing the submeter to record usage.

In October 2013, an investigation by the Columbus Dispatch discovered that the practice of reselling public utility services has inflated some residential utility bills by as much as 40 percent, compared to customers who are billed directly by a public utility.

Following the newspaper series, several bills related to the reselling of utility services have been introduced in the Ohio General Assembly.

The Office of the Consumers’ Counsel (OCC) has been working with legislators and other stakeholders to address the concerns associated with the practice of reselling.

In testimony before the Ohio House Finance and Appropriations Committee in April 2014, the Consumers’ Counsel provided recommendations to protect consumers from the high costs of resold public utility services.

In December 2016, the Public Utilities Commission of Ohio’s (PUCO) commission-ordered investigation into the practice of submetering found that submetering companies can be subject to PUCO regulations under certain circumstances depending upon their business model and the amount of the charges. The PUCO requested comments from interested persons concerning the level of additional charges that submetering companies could charge above regulated charges for similarly situated consumers.

In March 2019, Senator Tina Maharath (D - District 3) introduced new legislation on submetering, Senate Bill 86. This bill would provide consumers with some regulatory protections from the reselling of utility services. The Office of the Consumers’ Counsel will analyze this legislation and make recommendations for consumer protection as it goes through the legislative process.

For more information about submetering, see:
Submetering FAQs: Utility Service for Tenants of an Apartment of Building Complex 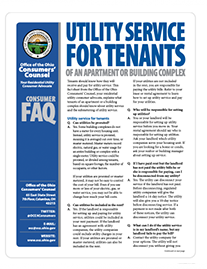