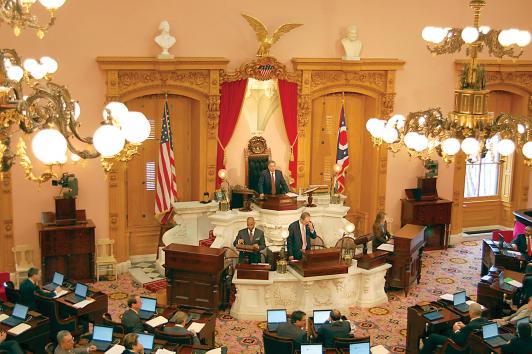 Ohio’s 4.5 million residential households are affected by the state’s utility laws every day. A law impacts rates and consumer protections involving electric, natural gas, telephone services, and water. It usually begins as an idea, which then goes through a variety of steps to become a law. Here’s how it happens.

The need for a new law can come from anyone: a concerned citizen, business, legislator, state agency, the governor, a lobbyist, or other group. The legislation could be the result of a court decision or an action taken by the federal government.

The staff of Ohio Legislative Service Commission (LSC) writes all legislation. The LSC makes sure the draft bill does not conflict with other sections of Ohio law. It also makes sure the proposal is technically accurate. Some legislation may be less than a page in length, such as the naming of a bridge, or it could be hundreds of pages long, such as the state’s two-year budget. More information about LSC can be found at its website: www.lsc.ohio.gov.

The time it takes for a policy to go from idea to law differs depending on the subject, the perceived need to act, the detail required in writing it and/or when legislation is introduced. A law could be created in a matter of days or take years. In fact, the process for many of the state’s laws stretches over many terms of the General Assembly, which is made up of two chambers: the Senate (33 members) and the House of Representatives (99 members).

A term or session of the General Assembly is two years. Legislators usually schedule committee hearings and full House or Senate meetings to discuss proposed bills on Tuesday, Wednesday, and Thursday of each week. Some meetings occur on Mondays, Fridays, or even weekends, though that is rare. The schedules are posted on the website of the General Assembly www.legislature.ohio.gov/schedules/session-schedule. With its three-day work week and breaks during the year, the General Assembly typically meets in Columbus less than 100 days in a given year.

After a bill is introduced, it is assigned to a legislative committee. Each bill goes through hearings in its assigned committee. The number of hearings depends upon how complex the bill is. These hearings are open to the public, and anyone can speak for or against the legislation. To proceed, a bill must receive at least a majority of “yes” votes from the committee members, who may change the legislation with amendments or combine similar bills.

The bill then goes to the chamber’s Rules Committee. It selects the bills for floor votes on any given day. A bill sent to the chamber floor can be debated by all members of the chamber and changed before it is voted on. To pass, a bill must receive a majority vote.

Once the bill passes in one chamber, it is sent to the other chamber, where it goes through the same process. Both chambers must agree on the same language before the bill is sent to the governor, who may sign it into law or veto it. The governor may decide to neither sign nor veto the bill, in which case it becomes law after 10 days. The governor has the power to veto parts of a bill, but only if it deals with the state’s money. If the governor vetoes a bill, a three-fifths majority in both chambers is required to override it.

A bill signed by the governor becomes effective on the 91st day after it is sent to the Ohio Secretary of State. However, if the legislation was passed as an emergency measure it becomes law immediately after being filed with the Secretary of State.

If a bill introduced during a two-year session is not approved by both chambers of the General Assembly by the end of the term, it needs to be reintroduced after the next session begins. No matter how far along in the process a proposed bill has gone, it must start over. Thus, many bills introduced late in a session are less likely to become law because there may not be enough time for them to pass both chambers. Although several hundred bills are introduced in each chamber in a two-year span, only a small percentage become law.