What is wind power? 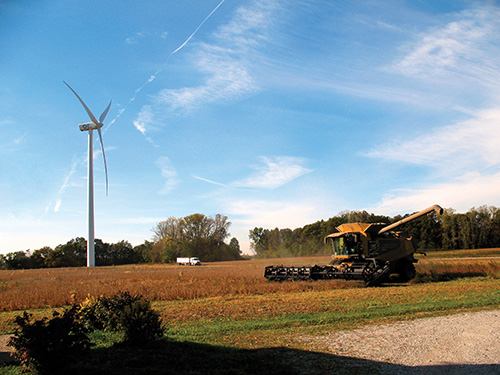 Wind is an abundant, natural, and renewable resource that can be captured and converted into energy using wind turbines. Wind turbines come in several sizes, from 100 feet tall to 400 feet tall, but the concept is typically the same: the wind blows and turns two or three propeller-like blades around a rotor that is connected to a tower. This rotor then spins an electricity-producing generator.

The scale of wind energy capture ranges in size, from a single small turbine producing a few kilowatts of electricity, to a wind farm producing hundreds of megawatts. A 1-megawatt rated wind turbine can produce enough energy to power 200-300 households. If wind power were the only source of power for homes, a storage system would be needed, as the wind does not blow all the time; however, storage typically is not needed because wind generators make up only a portion of the power in a utility system, and other fuel sources are used when the wind is not blowing.

The most economical application of wind turbines is when they are grouped into “wind power plants” or “wind farms.” For example, a 152-turbine, 304-megawatt wind farm that lies in Van Wert and Paulding counties serves 76,000 homes annually.

Today, a 50-megawatt wind farm can be completed in 18 months to two years. Most of that time is needed to measure the wind and obtain construction permits. The wind farm itself can be built in less than six months.

According to the American Wind Energy Association (AWEA) Ohio currently ranks 25th overall for total megawatts of wind energy produced. Through 2018, Ohio had an installed wind capacity of 729 megawatts, a drastic improvement from the eight megawatts produced in 2009. Wind energy accounts for 1.3% of in-state energy production.

Ohio is the nation’s leader for wind-related manufacturing, with 60 facilities producing products for the wind energy industry – more than any other state per the American Wind Energy Association. Through 2016, the industry supported between 2,000 and 3,000 Ohioans’ jobs.

Most of the wind turbines in use today are on land. However, more off-shore wind sites are being built. The first off-shore wind farm was built off the coast of Rhode Island in 2016. A 2008 report from the U.S. Department of Energy indicates that wind energy could provide at least 20 percent of the nation’s electricity by 2030, which would be enough electricity for 90 million homes.

Pros and cons of wind power

Wind is a free, renewable resource that does not emit any pollutants into the environment. As many as 5,000 tons of carbon dioxide emission can be prevented each year by a single wind turbine. It would take 500 acres of forest to absorb that much carbon dioxide.

Wind turbines can also provide extra income for farmers. A farmer in Ohio could make $11,000-$14,000 per year for each utility-scale wind turbine leased on the land, according to the Ohio Farm Bureau Federation. The land around the turbine can continue to be used for growing crops or grazing livestock.

One of the main issues with wind power is its variability and the need for constant wind to generate measurable amounts of electricity. Many people also have expressed little desire to have wind turbines near their homes because of the visual impact that they have on the landscape, and other issues. Lastly, there are reports each year of birds and bats killed after flying into a turbine’s rotor blades; however, in many cases, research is performed on migratory flight patterns before building wind turbines to decrease the possibility of this occurring.